Saving is something I feel everyone is doing all the time for one thing or another, me included. There are always short term and long term things people want in life and unless you're stinking rich, you gotta save towards those things, I have a pretty long List of things I want to save for in the long run, some things are only a few months to save and some are things I'll be spending the next couple of years saving for, so I thought it might be interesting to share those things with you guys, as well as the rough amounts for each. 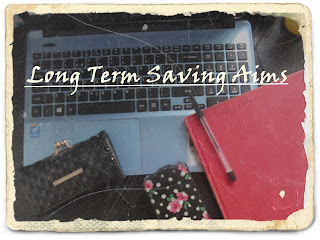 -Sewing machine: £50-£100: I'm dying to get into proper dressmaking as I'm getting a good grip on sewing by hand but for that I'll need a sewing machine, I know IKEA does one for £40 but I'm considering saving for a slightly better and bigger one, I'll hopefully have this by December, if not then I'll be asking for one for Christmas.

-Mannequin: £20: This is nearly short term as it's not expensive but It's not necessary either which is why it's considered the long term, because I'll be waiting till I feel I can spare the £20 and it wouldn't do to better use else where. It'll be awesome for cute display purposes as well as dressmaking.

-Slow Cooker & Food Processor: £70-80: Living alone and cooking for myself for a year really made me want to get better with cooking and experiment with more recipes but I've had a few cases where I've needed a slow cooker or food processor to make the recipe properly, I'm aiming to have this early next year.

-PS4 & Xbox One: £350 odd each: These are big buys. I first wanted only the Ps4 because of Bloodborne but more and more releases are coming to Xbox One that I'm starting to think of getting one, I currently have a Xbox 360 and a laptop capable of playing most PC games. Maybe I'm just being a collector/hoarder but I want them. This will be a long time coming though because of the I don't need them thing, The PS4 will be first and if I could get another job in Brum I think I could get one mid next year some time.

-Car and Lessons: £5,000 The longest saver here, Saving for driving lessons, the needed tests and for a good car. And I most like will need even more than £5,000, but that's my aim. I'm hoping to have the lessons money mostly collected by next summer so I can hopefully learn and pass then, after that saving for a car will be dependent on my job situations but with any luck will only be 2/3 Years/

-Holidays: £1,500: So next year I'll be going on holiday 3 times, Dublin in march, Spain in the beginning of April and Amsterdam in July. It's going to be amazing but that's a lot of spending money and travel costs to cover. But they are all around £500 and If I'm well behaved with my spending and work, I should be quite set, Though these Holidays set back the rest of the long term savings options.

Nokia Lumia 725: £140: The phone I already bought and got broken in a month due to drunk people in clubs but I really adored this phone and want it again as soon as possible, It'll be another one for the Christmas list most likely.

What are your long term saving Goals?
Let me know in the comments down below!