So hi...
So my weekend my been enjoyable despite the fact that it had been snowing since friday! Mind you it is the end of march! it's strange to thin that this time last year it was one of the hottest march's in england and now this year is the coldest! We have non-stop snow and icey paths and roads... which will be very fristrating for me when trying to reach college tomorrow.
anyway I spent yesterday out with friends for the first time in a long time and had a lovely day Even through the cold! and relaxed in a friends house! 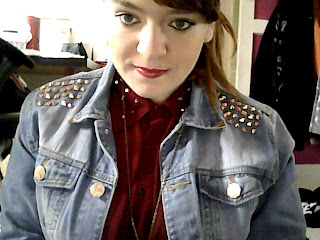 And more interestingly today I went shopping with my dad and got a few items that I needed and dad was willing to buy for me! I have done a haul video on the things i've bought which I'll link but I'll just list the things I got as well!
most importantly i was able to get a new bag for college which I love and was from primark for £9
It's a blue back pack styl that looks like this 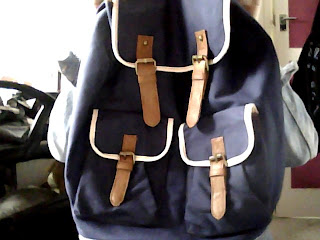 I absolutely love it and it took a while to find as all the other bag we found were too small or just had patterns that I was not particularly fond of!
I also got a few pairs of plain and patterned tights as you can never have too many tights and mine rip often, as well as two new pairs os flat shoes which I needed as i don't have many pairs of casual shoes and my favourite oots are pretty much at the end of their life now which I am very sad about and very unwilling to throw away!
also today I was supposed to be going food shopping for quite a few different ingredients to make different goodies like slutty brownies and loads of other things as well as try out different meal idea like a samon dish and sweet and sour chicken however as I did not sleep well last night I ended up oversleeping this morning and dad said he could not take me both normal shopping and food shoppping as he wanted to watch formula 1 racing and the shops would be closed by the time it was finished, which is very upsetting. However I hope to get the ingredients soon and then a few posts will be up on here on all the different goodies and meals I decide to make!
The Haul Video!! http://www.youtube.com/watch?v=_eLUZswtTos&feature=youtu.be