So hi
I told you all of my new beauty related purchases a while ago and I have now come back with my verdicts!

I'll start of with the liquid eyeliner which I picked up for £1! The application was easy enough it had a pretty standard thin tipped brush that comes with liquid liners, I found it relatively easy to use and it came out smooth and jet black which was great as I feel sometimes black liquid liners don't look as black on the lids. the brush meant that I could create a thick or thin line, whatever I fancied that day which I highly appreciate. 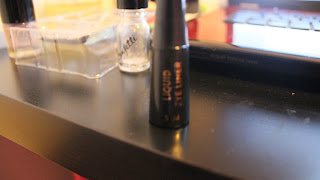 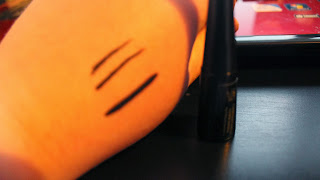 In relation to staying power I found that it lasted me all my college hours which is usually about 4-5 hours which is all I needed from it, it was still holding up well as I got home however I found that when it did start to come off it didn't fade like you would usually expect with liquid liners but it more crumbled off which was rather annoying as it would create fall out on my cheeks and where I could pretend I was going for a smokey smudged liner look with my other eyeliners as they fade, but this just made my eyes look half done, so I would have to take it all of and reapply it if I wanted to go out after those few hours of use. 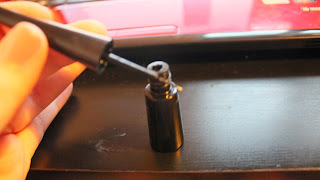 But considering the price it's quite a good little liquid eyeliners that does the job well for short outings, I would use a different one if you wanted eye liner that stayed put for a day and night on the eyes.

Now! the manicure set, The actual colour of the nail varnish you get in the set is quite a pretty colour, I'm not brilliant at describing colours so forgive me but it's like a greyish colour with a small tint of purple and brown, I know that's hard to imagine but I'll give you a picture! 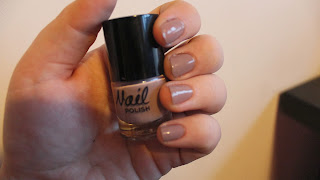 The nail varnish itself was quite easy and quick, and only needed one or two layers. the confetti step after applying the nail varnish however is another matter. now what your supposed to do is paint your nails and and when put the confetti into the little bowl thing they give you then dip each finger in the confetti pushing the confetti down onto each nail to make sure in sticks as the nail polish dries, I found this to not work all that well as either too much confetti would stick and look messy or hardly any would go onto the nails leaving it to all look a bit silly really. And don't even get me started on getting the confetti BACK into the bottle. 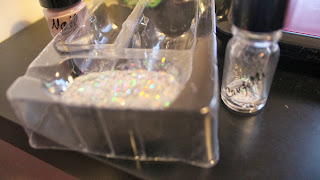 There to a small funnel shape at the end of the bowl you put the confetti in which is supposed to help you 'easily' get the dang stuff back into the bottle really did nothing most of the stuff ended up all over my desk my floor and myself! 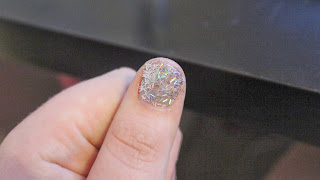 In the end I don't think I'll be getting the confetti bottle out anytime soon but I will likely be using the nail varnish itself as I like the colour. Though it may not be to everyone's taste and unfortunately I did not look to see if there were different colours of nail varnish as I was in a hurry when I bought these items.
Again for £2 it isn't a bad product, the nail varnish is decent quality and i'm sure many people who are much more skilled with their nail painting and art would be able to work the whole confetti look so I wouldn't completely cross it off your lists!
That was my review of  what I have tried out of primarks beauty offers, I feel like it;s a very hit or miss store since it's focus isn't make-up or beauty but fashion but they are very cheap and of quite good quality so I'm definitely not put off!